La Marea (The Tide), part of the 2011 PuSh Festival, offers a voyeuristic glimpse into unspoken thoughts, unknown futures and secret pasts; and is at once funny, intriguing, beautiful and sad. 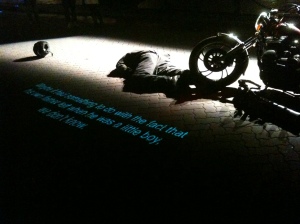 Co-produced by Vancouver based Boca Del Lupo, this is site specific theatre at its best. Taking over an entire block of Water Street, nine scenes play out on corners, in shopfronts, at windows above eye level, and in the case of Motorcycle – pictured above – in the middle of the street. The scenes are all accompanied by projected text, and are repeated during the two hours the piece takes place each evening. The audience are free to wander around at their own pace. At Tuesday evening’s opening it seemed that the audience was made up of an even mix of people there specifically to watch the piece, and confused passing pedestrians drawn into the action. I overheard the following exchange while watching Woman Sleeping: 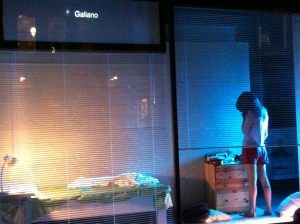 It’s clear to see why La Marea was chosen to open this year’s PuSh Festival – Festival Director Norman Armour spoke at Monday evening’s launch event about the theme of “cityness” and PuSh 2011 as a celebration of Vancouver’s 125 years, and great care has been taken to intricately weave the city into each of the nine vignettes. Touching on themes of isolation, loss and the interconnections between seemingly random incidents, as a whole it served as a reminder that every person has secrets, hopes, fears, a back story and a future. It highlighted the lies we tell ourselves about ourselves, how others see us and what the future holds; and made the private public – from the beginnings and endings of relationships, to the internal monologue of a man so caught up in his own midlife crisis, he can’t decide whether the purchase that will fix everything is leather pants or an almond croissant. Several scenes captured with unnerving accuracy the way our thoughts about the future tend to veer from one extreme to the other within seconds, one moment deciding that tomorrow will be amazing – I’ll move to Spain and everything will be amazing and I’ll be happy there – to complete certainty that all hope is lost – perhaps tomorrow I’ll kill myself. The truth is not so much that the reality is somewhere in the middle, but that it is unknowable – so why do we spend so much time analysing and obsessing about it?

La Marea takes place from 7-9 pm until January 22nd on the zero-hundred block of Water Street between Abbott Street and Carall Street, and is free. Wrap up warm and head down there – it’s well worth braving the cold. 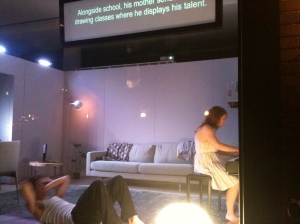 Back to My Reviews